It is commonly known that Successful Diplomacy is achieved by skillfully handling the combination of Representation and Communication. The Russian Federation has a long tradition of a professionally orientated Diplomatic Corps, as is proven by the fact that all Russian diplomatic agents in service are career diplomats. One of the most important aims of our International Diplomatic Club Amicability is to embody these ideals to build bridges between the Embassies that are represented in Moscow and the Russian society. The Club was created in 2015 as a non-profit organization, and we have organized and participated in many different events to achieve this goal.

We have long felt that we wanted to create an award to encourage and congratulate the foreign Diplomats that have stood out in their efforts to, in the same way we aim to, build bridges between their home countries and the Russian society. There are about 3,000 diplomats in Moscow, representing more than 200 different Missions.

In this sense, today we had the honor to hand over the diploma for “Best Diplomat of the Year 2020 in the Russian Federation” to the Minister Counsellor of El Salvador, Mr. Rodrigo Ernesto Gómez. He has been awarded this recognition for his successful efforts during the last year to position a country that was little known in Russia before, - El Salvador -, at the highest political, commercial, cultural and academic level in a very short time since his arrival to Moscow in the end of 2018, through exceptional networking and professionally organized events, quickly showing a great understanding of how the society in Russia works. Thus, he masterly combines the skills of representation of his country and creation of a strong and fruitful cooperation with the Russian Federation. All the events he organized were primarily aimed at making Russian society more aware of El Salvador, as well as how the government of El Salvador, led by President Nayib Bukele, is transforming and improving society for the benefit of its population. 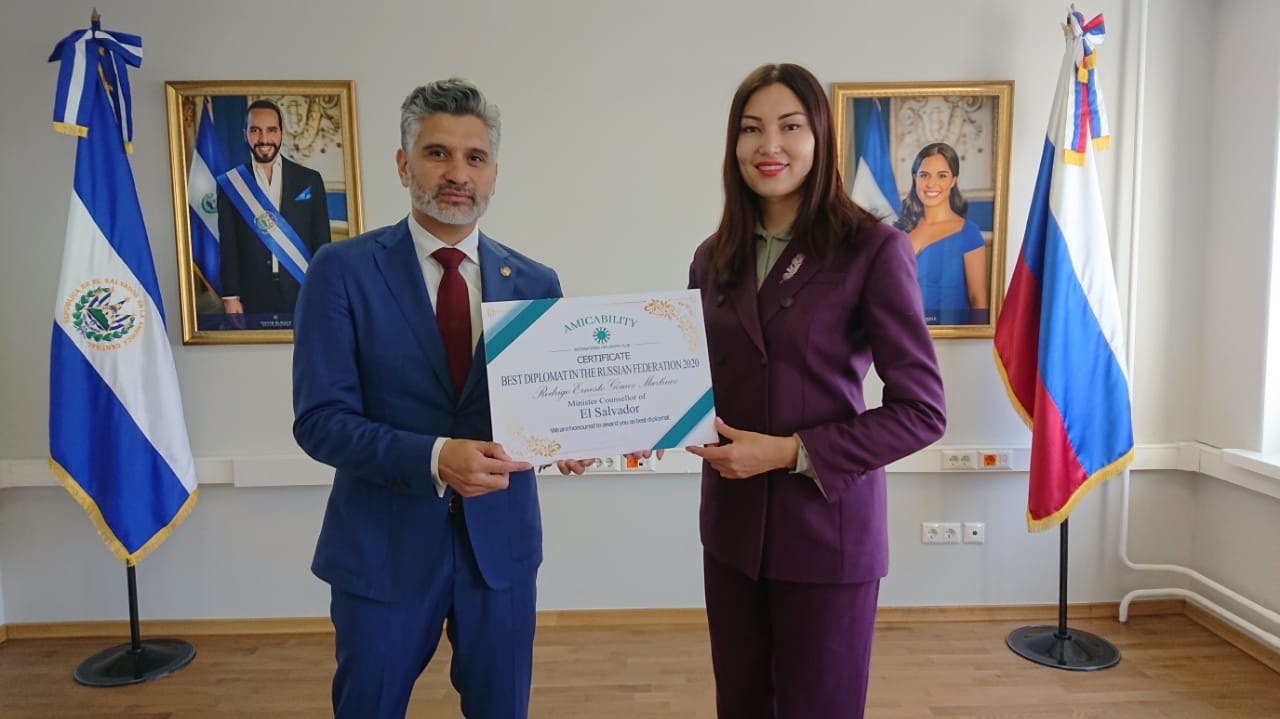 So, this is the first time a Diplomat has received this important award, and we are looking forward to experience more Proactive Diplomacy like the one practiced by the Minister Counsellor of El Salvador, Mr. Gómez, in the future.

An official ceremony will be arranged, probably in the month of August, by the magazine “Luxury in Russia” in collaboration with the Diplomatic Club “Amicability”, but we wanted to already now, give the Minister Counsellor of El Salvador this Diploma, in a symbolic ceremony. At the event in August, other important people will be awarded, and it will be attended by the political, cultural and academic elite in the Russian Federation.

Congratulations El Salvador for standing out brilliantly in the Russian society!